Arguably the most evocative city on earth built on its most inhospitable site, Venice stands on millions of wooden piles driven into the lagoons at the head of the Adriatic. Founded by Romans escaping the Barbarian invasions, it eventually grew to be the leading trade centre in the West, growing rich and powerful from the Crusades and commerce with the cities of the Byzantine Empire.

The expansion of the Ottoman Empire in the 16th C, the discovery of faster routes to the East, and the rise of Atlantic powers led to a decline in the enormous wealth and naval supremacy of Venice. But it was the melancholy recognition that the world had changed that resulted in a new Venetian civilization – one founded on culture, pleasure, and beauty. Thus, the city of the blind doge Enrico Dandolo leading the 4th Crusade against Constantinople in 1204 became the decadent city of Giacomo Casanova (1725-98) devoted to the pursuit of sensuality and delight.

Our visit to Venice will explore all these elements of Venetian civilization. And as those who have travelled with us before know, food and wine, as well as culture and art, will form part of the experience. From restaurants sublimely located on the Grand Canal or Piazza San Marco itself to celebrated establishments known for Venetian specialties, our dining will be an integral part of our exploration of the city.

There is a world of secret places and flavours in Venice which are revealed to those who know where to look. We welcome you to join us in our exploration of this most magical of cities – La Serenissima.

Why travel to Venice with Ken Bartlett?

Monday, April 20 – Seduced by Venice
The Venetian tradition of personal care and luxury begins from the moment you land at Marco Polo airport. You will be personally greeted and taken directly by private motor launch to the Hotel Monaco, perfectly located on the Grand Canal with its own dedicated dock for water taxis. The ground floor terrace where meals and drinks are served faces the islands of San Giorgio and the Giudecca and offers a spectacular view of the entire St. Mark’s Basin. On the evening of our arrival, we will enjoy a welcome dinner at the hotel (included).

Tuesday, April 21 – The Venetian Empire
We begin our tour in the heart of Venice’s history – the Doge’s Palace – which was not only the residence of this elected duke but also the centre of Venetian government. Terrible fires in the 1570s required the interior to be redecorated and the result is a wonderful, consistent celebration of Venetian glory by Tintoretto and Veronese and others. We will also enjoy the “Secret Itinerary” of the palace that takes us to the very rooms where Casanova was incarcerated. In the afternoon, we will visit the Museo Correr, the museum of Venetian culture. Dinner is included.

Wednesday, April 22 – Hidden Treasures of Venice
In the morning we will have a walking tour of Castello including the most remarkable churches of SM dei Miracoli, SS Giovanni e Paolo, and the Gesuiti. In the afternoon we will have an inside tour of La Fenice (The Phoenix) the famous opera house, which, despite its 18th C appearance, arose from fire (as befits its name) on two occasions, the most recent being January 1996. Dinner is included, after which we will enjoy a private, after-hours visit to Basilica San Marco at a time reserved for our group alone.  (Note: this visit may happen on a different evening in our program depending on the Basilica’s schedule.)

Thursday, April 23 – The Arts in Venice
The glory of Venice is distributed throughout the city in its grand churches and scuole. Our lengthy walking tour will bring us to the Franciscan church of the Frari, where elaborate ducal tombs line the walls and Titian’s Assumption adorns the altar. Then, it is on to the Scuola di San Rocco whose magnificent meeting hall was completely decorated by Tintoretto. The afternoon will be spent in the Peggy Guggenheim museum, once the private home of this eccentric art collector. Built on the ground floor of an unfinished 18th C palace, the museum contains the finest example of European modernism including works by such luminaries as Ernst, Magritte, Miró, Pollock, and Picasso. (Dinner is on your own.)

Friday, April 24 – The Venetian Lagoon Islands
After breakfast, depart from the hotel in private motor launches for a day exploring the islands of the lagoon. In Murano watch a glass-blowing demonstration. On Torcello, we will tour the extraordinarily well-preserved mosaics in the Basilica of Santa Maria Assunta, thought to have been created between the 7th and 12th centuries. And on Burano, we will stroll by the colourful houses and admire the lace for which the island is famous. Lunch (included) has been arranged at the celebrated Locanda Cipriani on Torcello, a gourmet’s delight patronized by fashionistas, princes, and movie stars since it was opened in 1935. (Dinner is on your own).

Saturday, April 25 – The Art of Living
This morning begins with the Ca’ Rezzonico, the palace museum of the Venetian 18th C, with its furniture, paintings, and Tiepolo ceiling. It was here that the poet Robert Browning died. Afterwards we will visit the museum and showroom of Bevilacqua, a textile firm that has produced silks and brocades since the 18th C on hand-operated looms and with patterns that are 300 years old. In the afternoon we will see how the fabric was turned into the clothes of the elite in the Mocenigo Palace, a perfectly preserved patrician dwelling that also serves as the costume museum of the city. Dinner tonight is included.

Sunday, April 26 – Quintessential Venice
Venice was the city of colour in painting – colore – and its magical light was the palette of its artists. This morning’s visit to the Galleria Accademia will take us through the history of Venetian painting from the earliest panels to the end of the Republic. You have the afternoon at leisure this Sunday to relax, shop and stroll through Venice on your own before our farewell dinner (included).

Monday, April 27 – Departure
After breakfast this morning, check out of the hotel and journey onwards, either home or to another travel adventure.

Fee does not include:

A noted scholar, Ken is the author of The Civilization of the Italian Renaissance (1992) (2011) and The English in Italy: A Study in Culture and Politics, (1991). He has collaborated with fellow scholars on translations and editions of primary texts such as Giovanni Della Casa’s Galateo. In addition, Ken has published over 40 articles and contributions to books on various aspects of the Renaissance.

In 2005 Ken became the first professor from a Canadian University to be signed by the Teaching Company. Since then, he has produced three popular lecture series: The Italian Renaissance, The Italians before Italy, and, most recently, a 48-episode series on The Development of Western Civilization.

Ken’s commitment to teaching was acknowledged in his appointment in 2002 as the first Director of the Office of Teaching Advancement for the University of Toronto. Over his career, he has won numerous teaching awards including the prestigious 3M Teaching Fellowship (2005), the inaugural U of T’s President’s Teaching Award (2006), and the inaugural province of Ontario Leadership in Faculty Teaching Award (2007).

Dr. GILLIAN BARTLETT is, by profession, the author of eight textbooks, a teacher, writing coach, and editor. She has worked in communication education for more than thirty years both in public and private institutions, including the National Ballet School, the University of Toronto Schools, and the School of Continuing Studies at University of Toronto. By avocation, Gillian is a passionate tourist and tour leader who has served as hostess on close to a dozen tours in Europe. Her great joy is to ensure not only the smooth delivery of a travel itinerary but also the comfort of every individual in the group. 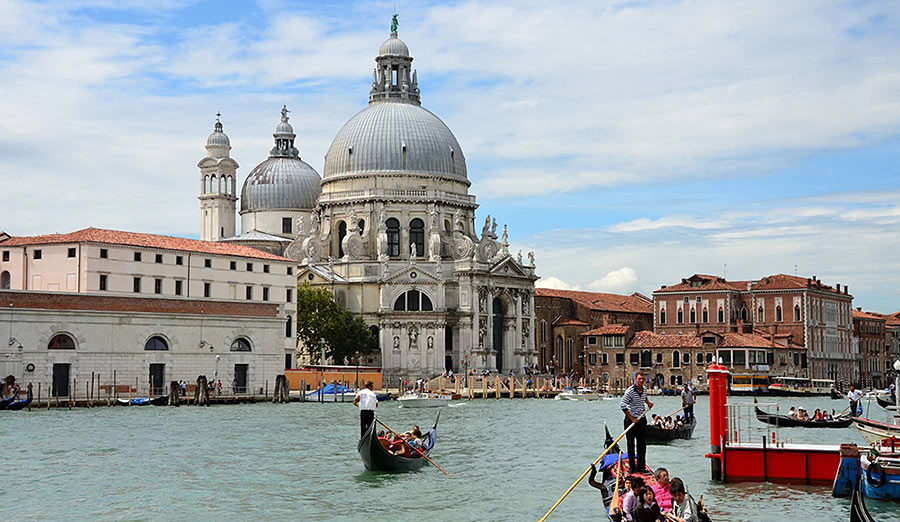 Want to learn more about this trip?

This trip is offered in conjunction with Bartlett Cultural Connections, Professor Bartlett’s educational travel programme. Each year Professor Bartlett leads a number of tours to Europe. If you would like more information about other upcoming tours, please email us.

Tours are generally categorized as “active” and require a degree of physical fitness allowing approx. 6 km of walking per day. This group tour involves multiple  elevations on uneven terrain, including but not limited to stairs, bridges, and embarking and disembarking from boats. If you are concerned about the level of activity, please contact GHT to discuss further prior to registering.

Fine Print: It is the responsibility of all participants to ensure that they have a valid passport and that no additional travel documents are necessary. Georgia Hardy Tours Inc. is not responsible for inadequate travel documents. Georgia Hardy Tours reserves the right to make changes in the itinerary when necessary for the convenience and safety of tour participants. Any extra cost in the unlikely event of itinerary changes must be borne by the individual participant.

Responsibility and Jurisdiction: Georgia Hardy Tours and their agents act only as agents for the passengers with respect to services supplied to passengers by others, including but not limited to transportation, hotel and restaurant services, on the express condition that they are not liable for any failure in such services, or injury, loss or damage, delay or inconvenience arising out of or in connection with any defect in any vehicle or any act, omission, accident or error in providing such transportation, hotel, restaurant or other services. There is no refund for unused portions of the tour. In case of an accident occurring during the land portion of any tour, the passenger must submit any claim therefore only to the competent judicial authorities of the jurisdiction where such accident occurred, to be determined exclusively in accordance with the laws of such jurisdiction. By accepting the coupons and tickets and utilizing the services, the passenger agrees that Georgia Hardy Tours nor any affiliated or subsidiary companies or representatives shall be liable for any loss, injury or damage to the passenger or belongings or otherwise in connection with any accommodations, transportation or other services or resulting directly from any occurrences beyond its control including breakdown in equipment, strikes, theft, delay or cancellation or changes in itinerary or schedules, etc. Georgia Hardy Tours and its agents reserve the right to refuse to accept or retain any person as a member of this tour. The right is reserved to withdraw any or all of the tour or portions thereof. All tour services including, but not limited to hotel accommodations, restaurants, guide services and transportation are furnished by independent contractors.

We Would Love to Hear from You!

Do you have travel questions or would like to know more about how GHT can help you plan a group trip?